Slewing drive can be divided into gear drive and worm gear worm shaft drive according to different transmission forms.According to the different closed form of worm gear , it can be divided into open and closed two types. The simplest form of slewing drive is used in excavators and tower cranes drive slewing rings on construction machinery products, as the last link of the reduction transmission chain, this slew drive is open type gear transmission, its front end also needs to be equipped with a planetary reducer with a large gear ratio as its power input, so it can only be called the prototype of slewing drive.

In order to expand the application range of such products and further improve the convenience of product use and maintenance, a slewing drive with integrated worm gear worm shaft transmission has been developed. In order to further improve the drive capacity of the product, the enveloping worm shaft transmission is also applied to such products. The slewing drive equipped with an envelope worm not only increases the driving torque, but also improves the driving accuracy. It can also be digitally controlled. Therefore, it is widely used in tracking and fine-tuning devices on solar and wind power generation equipment. In addition, it has good application effects in the fields of robots, radar, low-speed heavy-duty lifting equipment, lifting equipment and precision CNC turntables.

The slewing drive solution of the Unique Transmission

The worm gear slewing drive of the Unique Transmission includes two categories: cylindrical worms and envelope worms. The cylindrical worms are suitable for medium-speed and heavy-duty applications, while envelope worms are suitable for low-speed, heavy-duty and high-precision applications. The worm gear slewing drive can be self-locked, which can provide basic safety guarantee in the field of dynamic movement and further simplify the overall design of the equipment, it is a superior industrial accessory.

The enveloping worm slewing drive of Unique Transmission is entirely derived from its own technology, processing technology is unique, processing process is fully CNC controlled. Therefore, the product quality is extremely controllable, the manufacturing accuracy is much higher than that of similar products, the performance of the finished product is also much higher than other similar products. In addition to the finalized products, the envelope worm and the matching worm gear can be flexibly optimized and configured according to user needs. According to different usage requirements and environments, the Unique transmission envelope worm can be made of a variety of materials and can be subjected to a variety of special heat treatments to make the product more durable in terms of user needs. For field environments such as solar and wind energy applications that require long-term maintenance and operation, this type of rotary drive product is the best choice.

The geared slewing drive products of U-TRSM are suitable for high-speed, medium-load and high-speed light-load conditions, especially suitable for light-load tooling equipment of construction machinery. Both open and closed types are available. The main parts are processed by standard heat treatment and fine CNC equipment and through the structure and strength optimization design. You can choose the high-durability type with hardened tooth surface, or the more economical ordinary type. This product has good economics, simple and convenient maintenance and low follow-up maintenance costs. It is the best choice for installation of civilian products.

Generally, the closed structure is used in humid, medium dust or corrosive gas environment and those with high environmental protection requirements that do not allow the leakage of lubricating grease. The closed environment can effectively prevent impurities from entering the slewing drive body and improve the machine service life. However, when there is too much dust in the environment and the slewing drive is completely placed in the dust, the sealing parts that play a role of sealing will accelerate wear and quickly fail. At this time, the closed environment may not be convenient for maintenance and parts replacement. However, it is more appropriate to use open structure slewing drive with the selection of tooth surface hardening to improve the durability of the parts. In addition, the open structure is convenient for cleaning impurities. If the use and maintenance can be done well, it may not have a shorter life than the closed structure, so all factors must be considered comprehensively in the process of product selection.

The slewing drives designed and produced by U-TRSM are available in SE/PE, WE, WEA and other series. The slewing drive can also be equipped with hydraulic motors, AC motors, DC motors, servo motors, stepping motors, etc. The bases of the slewing drives have open type and closed type. Generally, the open structure slewing drive is mostly used in applications where the environment is too wicked and the maintenance and maintenance cycle is short. The open structure slew drive is more convenient for inspection, maintenance and service of the machine parts, also more convenient for replacement. However, the closed structure can provide longer service life in occasions where the environmental conditions have not changed much and the environmental pollution level is below the medium level. 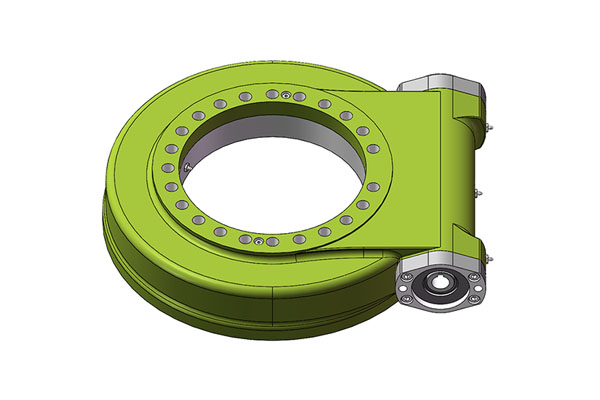 What is the worm gear slewing drive used for?